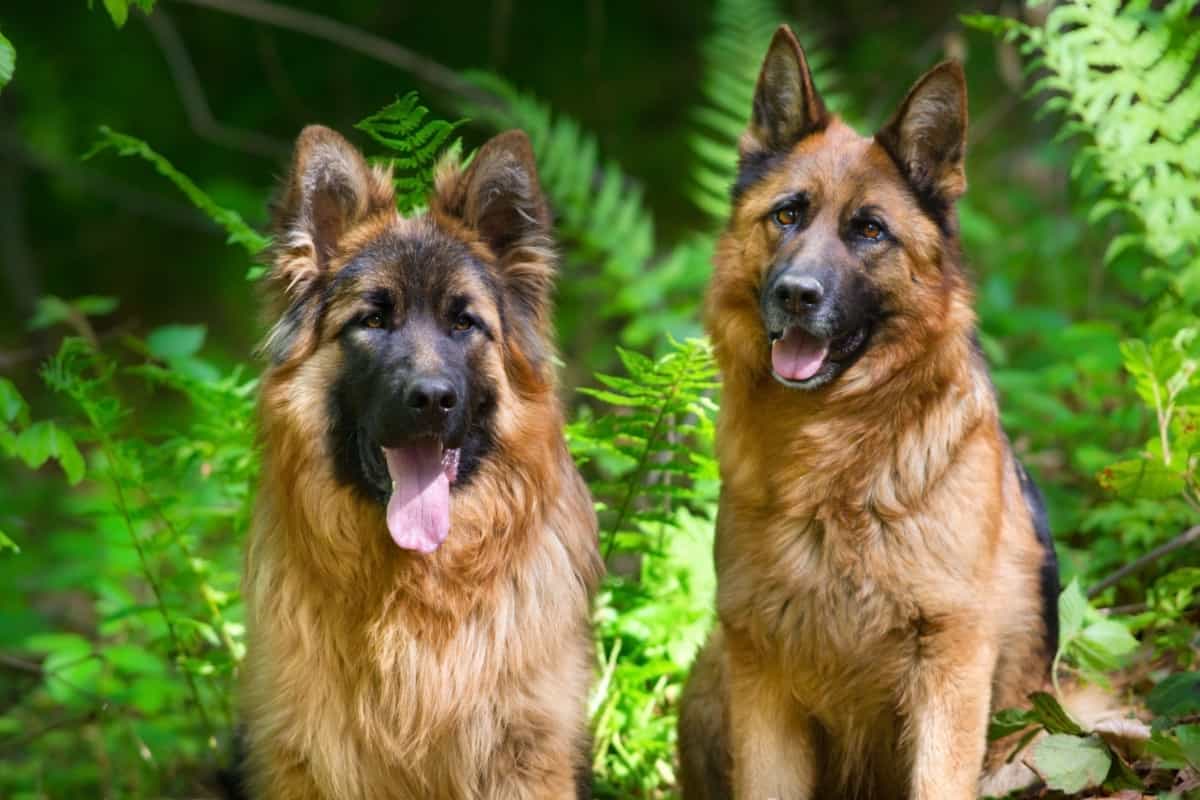 Whether a male or female German Shepherd makes a better pet depends on your experience, lifestyle, and your purpose for the dog, such as a guard dog. Male pets are more dominating and slightly harder to train whereas females tend to be less aggressive and make a better first dog as they are calmer.

Is a Male or Female German Shepherd a Good First Dog?

If you haven’t owned a German Shepherd before, then choosing a gender can be a difficult decision. Ultimately both sexes can be happy, healthy, and loving pets, as long as you have spent time socializing and training them. Female German Shepherds are generally recommended as better pets for first-time owners.

When I was choosing my German Shepherd from the litter, being a novice dog owner, I took the advice of my breeder. He recommended that I go with a female for the following reasons:

If you do your own research and speak to experienced breeders you will probably find that this opinion is reciprocated in the dog breeding world.

Male dogs will try to dominate you more as they wish to be “the leader of the pack.” Therefore you will need more confidence with a male dog as he may try to take advantage of your weakness. You will need to be very firm and show good leadership with a male German Shepherd.

German Shepherds are good first dogs as long as you do all the right things! As to whether male or female German Shepherds make better pets, it really does depend on whether you have any previous experience raising dogs in general, and what job you want the dog to do, for example, do you want a guard dog, protection dog, service dog, or just a companion pet?

and territorial and are therefore used more as police dogs, however, you can still get a shy male or a territorial female and both sexes can turn out to be excellent police dogs! Remember that the most influential factors are how you raise them, treat them, and the environment that you provide for them.

Before you choose a German Shepherd to be a part of your family, you should analyze the numerous differences between males and females to see which one would make a better pet for you. Now that you’ve hopefully seen the ways that they differ from one another, it’s time to review the advantages and disadvantages of both of them.

As you can see, both genders have pros and cons worth considering before you choose whether male or female German Shepherds make better pets. At the end of the day, German Shepherds are a wonderful breed of dog that can be a perfect addition to your family. Through proper socialization, training, high-quality food, exercise, and treatment, they continue to be one of the world’s favorite pets.

Are Male or Female German Shepherd’s Easier to Train?

One of the first considerations that most new dog owners think about is how easy it will be to train them. Potty training, tricks, crate training, and obedience training are all part of owning a dog.

German Shepherds are a top choice as police dogs, guide dogs, military dogs, search and rescue dogs, and service dogs due to their intelligence, bravery, strength, and loyalty. They have a fantastic ability to follow instructions and they love to please you, whether you want them to be a working dog or a loving faithful companion.

Females German Shepherds tend to be easier to train than males as they mature faster. It is this early maturity that gives them this advantage.

Nonetheless, the GSD is a highly trainable breed, no matter what their sex. Check out this fun 2-minute video showing extreme trained and disciplined German Shepherds:

You will need to be persistent and thorough with training though and I highly recommend Zak George’s YouTube Channel to help you with this. I highly approve of Zak’s ethical training methods and he has millions of subscribers to his channel who obviously feel the same.

However, there are definitely a few things to note before you choose either a male or a female GDS as a pet. As mentioned in the previous section, male German Shepherds like to dominate and therefore can be more stubborn. This trait can also make them harder to train, especially if you haven’t started until they’re one or two years old!

The best time to train your German Shepherd is from 8 weeks old when they’re highly teachable. I have a full beginner’s guide to help you with this.

Female German Shepherds are people pleasers. They will do whatever they can to make their owners happy, which is another reason why they’re usually easier to train. Without the stubbornness of a male German Shepherd, females excel in this area. Whether you’re teaching them how to sit or stay, or you want them to walk with you around town, females will be just that bit easier.

Some owners might argue that male German Shepherds aren’t so bad after all, and they wouldn’t be entirely wrong. Just because the average male can be stubborn, dominating, and territorial, it doesn’t mean that they all are! Not only that, but many of them also prefer to impress their owners just as much, and as they prefer to bond with one person, they’re also much more likely to obey their commands.

This aggressive trait can become a problem if you don’t tame it. Male German Shepherds tend to connect with one of their owners, which means they’re going to protect them at all costs. Remember though, there are no guarantees with this as male German Shepherds (and all dog breeds) can be timid, scared, and non-protective as well.

On the other hand, you can still teach a female German Shepherd to be a protective guard dog or police dog. Due to their high intelligence and willingness to learn and impress, females will also obey strict commands to protect their families. It all depends on how you bond and build a relationship with your dog. Both males and females can be protective or the opposite!

You should never train a German Shepherd to be aggressive. It’s far too often that owners want their pups to turn out to be ferocious beasts to intimidate other people and potential intruders. This style of training only causes aggression towards everyone, not just bad people.

Note: If you don’t train a German Shepherd to be protective, it is highly unlikely that they’ll attack intruders. Contrary to popular belief, they don’t have the instinct to be aggressive towards someone unwelcome. It’s impossible to expect a soft, relaxed, shy German Shepherd to suddenly become a hero in the event of an emergency.

in the UK. During this study, the average longevity of the GSD overall was 10.3 years, with females living for 11.1 years and males 9.7 years.

Both male and female German Shepherds have a few health problems that they’re prone to developing. They can range from a minor case of diarrhea to life-threatening conditions such as bloat (GDV). which affects large dog breeds and in particular, deep-chested dogs such as the GSD.

It is well known that large breed dogs don’t live as long as smaller breeds. This study

by the National Center for Biotechnology Information concluded that large dogs die young mainly because they age quickly.

Some of the health conditions found in German Shepherds include:

To prevent health problems in your German Shepherd, here are seven helpful suggestions:

German Shepherds can mix and bond with families. There’s no reason to believe that German Shepherds aren’t good family dogs, but there are a few things to think about before you choose either a male or a female as your pet:

Both males and females are fantastic family pets with good owners. They’re as loyal as it gets, and they’ll make you very happy. As long as you’re able to fulfill their physical and mental needs, you’ll be able to enjoy plenty of years with your new German Shepherd.

Regardless of whether you choose a male or female German Shepherd as your pet, you’ll be able to bond with them in no time and enjoy all the love that they’ll bring to you and your family.

While there are no guarantees on the temperament, size, or lifespan of the German Shepherd puppy that you choose, I hope I’ve given you some very useful pointers to help you decide whether a male or female German Shepherd will make a better pet for you.

Willow Online Publishing is a participant in the Amazon Services LLC Associates Program, an affiliate advertising program designed to provide a means for sites to earn advertising fees by advertising and linking to Amazon.com. We also participate in other affiliate programs that compensate us for referring traffic.

I am the owner of World of Dogz. I have a 5-year-old female German Shepherd named "Willow" and I've worked with dogs for almost 30 years. I love spending time with my dog and I enjoy sharing my knowledge and expertise of all things dogs on this site!

link to How to Discipline a Labrador: What Not to Do!

If you are choosing a Labrador as your first dog, you may wonder, what do I feed my dog, and what do they like to eat? And even if you are an experienced Lab owner, you may occasionally wonder what...

I’m Sharon Waddington, and this is Willow my German Shepherd. I’m a retired Police Officer who worked alongside GSDs for almost 30 years, but I’m passionate about all dogs. Here, you will find a ton of helpful tips and info, whether you are choosing your very first pup, are an experienced owner, or just a lover of dogs in general. This site is the ultimate resource for everything dogs! Welcome!

This site is owned and operated by Willow Online Publishing. World of Dogz is a participant in the Amazon Services LLC Associates Program, an affiliate advertising program designed to provide a means for sites to earn advertising fees by advertising and linking to Amazon.com. As an Amazon Associate, I earn from qualifying purchases. This site also participates in other affiliate programs and is compensated for referring traffic and business to these companies.

World of Dogz is to be used for educational and informational purposes only. This site is not intended to constitute pet medical advice, diagnosis, or treatment for your pet. Please consult a licensed veterinarian in your area for pet medical advice.

You can find out more about which cookies we are using or switch them off in settings.

This website uses cookies so that we can provide you with the best user experience possible. Cookie information is stored in your browser and performs functions such as recognising you when you return to our website and helping our team to understand which sections of the website you find most interesting and useful.

Strictly Necessary Cookie should be enabled at all times so that we can save your preferences for cookie settings.

If you disable this cookie, we will not be able to save your preferences. This means that every time you visit this website you will need to enable or disable cookies again.